There Were Four Unique Colour Schemes

Roy Windover, the first Red Knight, stands in front of his fluorescent red Canadair T-33 “Silver Star” just prior to his appearance at the 1958 Canadian International Air Show in September, 1958. The photo was taken at RCAF Station Trenton, Ont. The aircraft carries the standard RCAF marking of the day. The markings were masked and the rest of the aircraft was painted Day-Glo red. Notice the operational machine guns in the nose of the aircraft. (Canadian Department of National Defence photograph.)

Bob Hallowell, the first “official” Red Knight, in flight over the city of Saskatoon, Sask. This photograph shows the second Red Knight colour scheme which was used during the 1959 and 1960 air show seasons. The aircraft was painted all over Day-Glo red and then the standard RCAF markings of the day were applied on top. A silhouette of a Knight’s helmet has been added to the nose of the aircraft. (Canadian Department of National Defence photograph.)

An aerial view of the third and most well-known Red Knight colour scheme. This scheme was first applied for the 1961 air show season. The aircraft features a bright red knight’s helmet with yellow plume on a white, circular background. This would become the Red Knight emblem for the remainder of the program. In 1967, Canada’s Centennial Year, the Day-Glo red was replaced with a more durable bright red epoxy paint. This scheme was used until mid-1968, when the Red Knight switched to the Canadair Tutor aircraft. (Canadian Department of National Defence photograph.)

For the final two seasons, (i.e. 1968 and 1969), the Red Knight flew the Canadair Tutor. The aircraft was painted vermillion red and featured a white line that ran along the side of the aircraft from nose to tail. The Red Knight emblem was applied over the white line just in front of the cockpit. (Bombardier Aerospace photograph.) 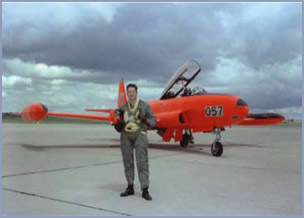 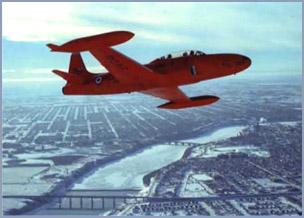 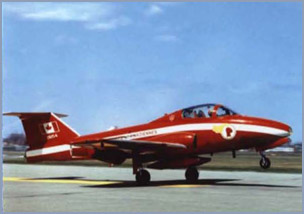