A publication of the highest quality, THE RED KNIGHT chronicles the history of the program, from conception to cancellation. Everyone who has enjoyed watching the precision, grace and beauty of aerobatic flight will enjoy this insight into the “behind the scenes” aspect of aerial displays. A fine addition to any aviation reference library, THE RED KNIGHT will be of particular interest to anyone who remembers the program or saw a performance of this uniquely Canadian display.

The Red Knight is the product of 25 years of meticulous research. It is, arguably, the most comprehensive account ever written about the Canadian Air Force’s legendary solo jet-aerobatics performer. An important part of Canadian aviation history, the Red Knight is second only to the Snowbirds in longevity and total number of performances.

The story of the Red Knight begins in the eastern Ontario town of Trenton during the days leading up to the Labour Day weekend of 1957. There were several reasons that, in the late 1950s, the time was right for the Red Knight, as Jack Waters explains: “It was not surprising that the Red Knight aerobatics demonstration program saw its beginnings as post-World War II RCAF Training Command (TC) reached its zenith in the 1950s...

Windover had the winter of 1957/58 to plan his solo aerobatics display. However, he did not record a “low-level aeros” practice session until June 9 – less than a week before a planned performance at Trenton’s Air Force Day (AFD). Bob Hallowell offers a possible explanation, “Aeros were part of our daily routine so the practice would be only for the show routine.”

Two noteworthy Canadian aviation anniversaries would occur in 1959 and a number of events were being planned to celebrate. History was made 50 years earlier in Baddeck, Nova Scotia when J.A.D. McCurdy became the first person to fly a powered aircraft in Canada....

As 1960 began, Hallowell was looking forward to a full season as the Red Knight. The “Act” was becoming quite well known and requests for appearances were starting to come in from all over the country. Although the 1959 season had given Hallowell some insight into the logistical issues he would be facing, the much-expanded 1960 schedule would present additional challenges...

As the New Year began, Hallowell was looking forward to another full season as the Red Knight. He had sorted out many of the issues that had caused him problems in the past. According to Hallowell: “I was finally getting things going. We were getting a nice new airplane, and a new paint job...

With Ray Goeres moving on to Transport Command and the confusion over a “rumoured” transfer of the program clarified, Dave Barker assumed the role of Red Knight. His father’s pride was reflected in a newspaper clipping (source unknown) from the family scrapbook...

Training Command’s Operation Order 2/63, dated March 21, 1963 stated, “The Red Knight shall again be activated for the 1963 air display season for the purpose of maintaining public interest in the RCAF by performing at selected military and civilian functions.” By the third week in August, “public interest” may have exceeded what was sought...

Roderick William “Bill” Slaughter was born and raised in Winnipeg. In discussing his youth, Bill explained: “When I was young, (that was during the war), my dad was a mechanic in the air force. He was with the reserve air force and, of course, the reserve air squadrons were the first ones to England, just prior to the Battle of Britain...

Although the Red Ensign had been used unofficially since the 1890s, Canada never had its own flag. In 1964, Prime Minister Lester B. Pearson appointed a committee and tasked them with selecting a national flag. In the end, the maple leaf design was selected. On February 15, 1965 Canada’s new flag was hoisted for the first time at RCAF stations around the world. The Red Knight aircraft (being refinished in Edmonton at the time), were among the first RCAF aircraft to be adorned with the new flag...

By late April, preparations for the 1966 season were well under way. Joining the team as the new OC was S/L Ken Sheppardson, who was a strong supporter of the program. Terry Hallett was ready to take over the lead role but Sheppardson was still looking for an alternate...

On December 11th 1967, Training Command Headquarters (TCHQ) submitted its initial proposal for the operation of the Red Knight programme in 1968 to Canadian Forces Headquarters (CFHQ). When it came to pilot preparation, there were many lessons to be learned from the 1967 season. Because Waters and Ellis transferred in so late, it was felt that their training was “rushed and inadequate.”...

By the time preparations for the 1969 Red Knight season began, Dave Curran had received word that he was being loaned to the USAF. Since there was no alternate from the previous season, the 1969 Red Knight would be starting from scratch. Applicant requirements were set high to ensure that the individual selected would be qualified to handle the role and its associated responsibilities... 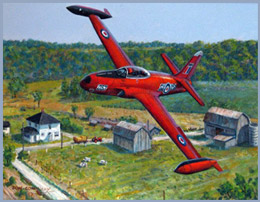 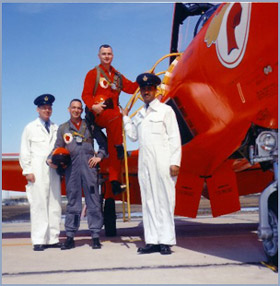 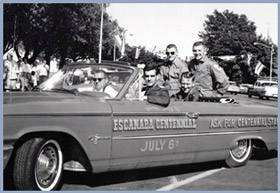 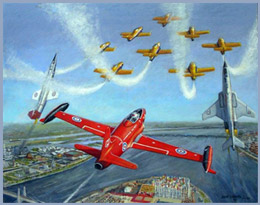 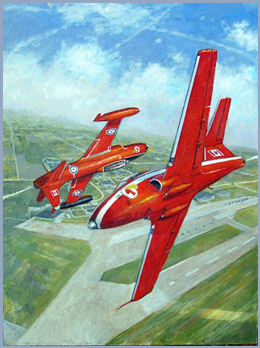