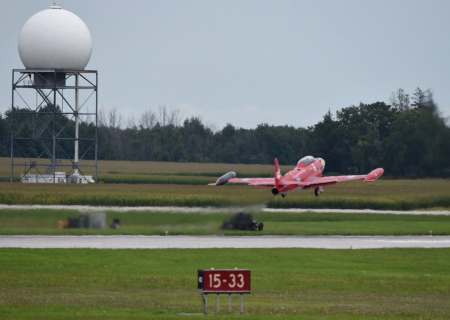 receives its Certificate of Airworthiness after Inspection by Transport Canada's Inspector.
7-11-2018: The Red Knight by John Charles Corrigan now available at Lighthouse Books
65 Main St., Brighton, ON, (613) 475-1269. The book is also available at Avworld, 195 Carlingview Dr., Etobicoke, ON, (416) 674-5959 and the Canadian Warplane Heritage Museum, 9280 Airport Rd, Mount Hope, ON, (905) 679-4183. Don't live close to one of these retailers! Ask you local book store to order a copy for you.
6-23-2018: 'The Red Knight Media Kit' Released
The Red Knight Media Kit has been released and is now available. See What's In It
6-23-2018: Canada Day - The Red Knight e-Book Giveaway
This is your chance to receive a free e-Book versions of The Red Knight by John Charles Corrigan. Be one of the first 10 people to Contact the Author and receive an iTunes promo code for a complimentary copy of The Red Knight for your cell phone, tablet or computer. (Please, only one promo code per person.)
6-6-2018: Jet Aircraft Museum (JAM) in London, Ontario
The JET AIRCRAFT MUSEUM (JAM) exists to create and maintain a dynamic and living history of the modern age Royal Canadian Air Force and to provide permanent honour for those valiant Canadian men and women who flew these aircraft with distinction in periods of war, peace, and peace keeping. In short, our mission is to “Preserve, Educate, and Soar”. The museum recently restored CT-133 Silver Star 21573 in Red Knight colours. While preparing to have the aircraft certified as airworthy by Transport Canada they did an engine run up.
Watch the Video
12-15-2017: Airforce Magazine
Airforce Magazine is a quarterly Royal Canadian Air Force Association (RCAFA) publication, designed for an aviation-minded readership. Crafted primarily by the association’s members, Airforce Magazine promotes the involvement of youth in aviation activities, the preservation of Canada’s proud air force heritage, and the advocacy of topical issues, particularly those related to the Canadian Forces and Canada’s air power. Airforce appeals to every generation – young and old; every aerospace community – civil and military, technician and crewmember; and covers every horizon – yesterday, today and tomorrow. Airforce is Canada’s air power heritage voice. The Red Knight by John Charles Corrigan was reviewed by BGen (Ret) T.F.J. "Terry" Leversedge in Vol 41 No 3 of Airforce Magazine. Read the Review
11-30-2017: Kirkus Reviews
Kirkus Reviews is an American book review magazine published on the 1st and 15th of each month. Every year they review over 7,000 titles. See what Kirkus Reviews said about The Red Knight by John Charles Corrigan Read the Review
THE RED KNIGHT
Canada's Legendary Solo Jet-Aerobatics Performer
By Canadian Author John Corrigan ©
CONTACT JOHN