Part of the appeal of the Red Knight was its ability to get up close with spectators. Many newspaper articles mention the “unique feature of the Red Knight’s show” was “that all manoeuvres are carried out within the confines of the airfield” and how this was “a most difficult task with a high-speed aircraft.” These manoeuvres were also reported to be the same ones every pilot learned during their flight training with the RCAF. Of course, this statement needs some qualification, as Bob Hallowell explained: “Remember that [the] speeds and altitudes [referenced in the flight manual] were intended for students so that they could screw up a sequence and still recover safely.”

The challenge for the Red Knight was to bring these manoeuvres down to very low levels and to tie them together seamlessly, so that the audience did not have to wait while the aircraft disappeared out of site to change directions. This was not an easy task! In order to achieve this, Hallowell had to utilize certain manoeuvres that would limit the amount of time and space required to change directions. According to Bob: “I did my vertical manoeuvres starting at much lower speeds and altitudes. This kept the show within sight of the display area and, hopefully, inside the confines of the airfield. It was a constant battle with [the] MOT and [the] FAA about crowd safety and trying to keep a show where it could be seen. By using slower speeds to start a looping manoeuvre I used less altitude and less G. My personal safety rule was that, over the top, I had [the] correct speed and altitude for a recovery 100 ft above my starting altitude. If not, I could half-roll over the top and turn it into a Cuban-eight, which is [a figure] eight on its side. The smoke helped keep your focus in all sequences providing [the] wind didn’t play hell!”

Climbing Departure: A slow speed climb from take-off, (airborne plus 10 knots), to get altitude in a short distance, then dive it off to get speed for whatever manoeuvre was next.

Plan Pull Up: Usually for an opener. Approach the display area from in front, head-on. Pull up just before overhead to show the plan view of the underside of the aircraft.

Clover Leaf: A very precise sequence, easier on the prairies where you have section lines as reference points at 90 degrees, more difficult at shows where the reference points, if any, (i.e. at the CNE over Lake Ontario), changed with every venue. Start with a dive to required speed. Pull back, and as the nose comes up through the horizon commence a slow half roll - to the right if a right cloverleaf and vice versa. The intent is to arrive at a 90-degree point inverted with the nose coming down through the horizon. Complete the bottom of the loop and start into the next lobe of the leaf.

Dirty Roll: A roll with the landing gear and flaps down and the speed brakes extended. 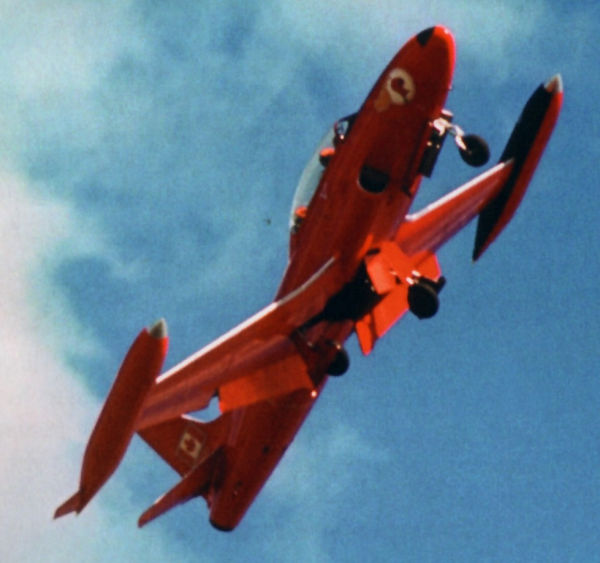 Dumbbell Turn: Merely a 180-degree turn to bring you back to a starting point. Usually done in a climb to stay closer in.

Inverted Pass: Going by the display area upside down. Make sure your ass is strapped in tight or you’ll lose control. The T-bird had a gravity oil system so inverted flight was limited to about eight or 10 seconds. I waited for the oil pressure gauge to flick, and then I’d roll upright. 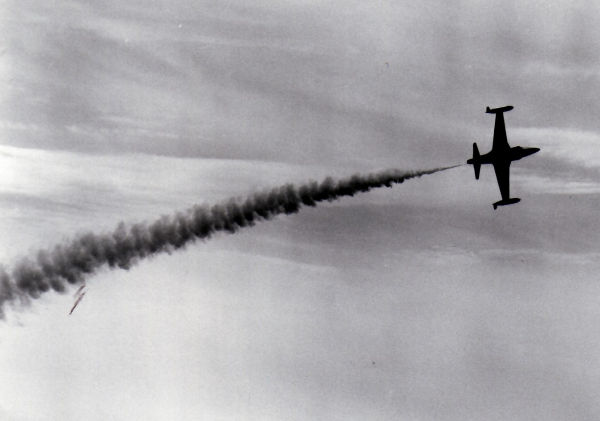 Roll-Off-The-Top: A half loop with a half roll at the top to a straight and level position. The aircraft is now traveling in the opposite direction from the start of the manoeuvre. The half roll is performed to keep the nose on the horizon.

Rhubarb Turn: A dumbbell with a roll-under to reverse direction.

Rolling Turn: A turn where the aircraft is continuously rolling.

Slow Speed/High Reverse: A dirty pass (gear, flaps and dive breaks down) then cleaning up and climbing away as with the departure. Note: Use of throttle for effect helped along with smoke. I would enter a sequence throttled back as much as possible then pour the coal to her as I started up the loop or whatever. Showmanship!

Slow Turn: Less speed, less G and dirty – everything hanging except the laundry.

Stall Turn: Pull up vertically facing the display area. At minimal speed (100 knots or so) kick in the rudder to make the aircraft go into a flat skidding turn until it is reversed downward. The aircraft is “flat” only insofar as its own axis. To the onlooker it appears to hang in the sky while revolving 180 degrees around its own axis. 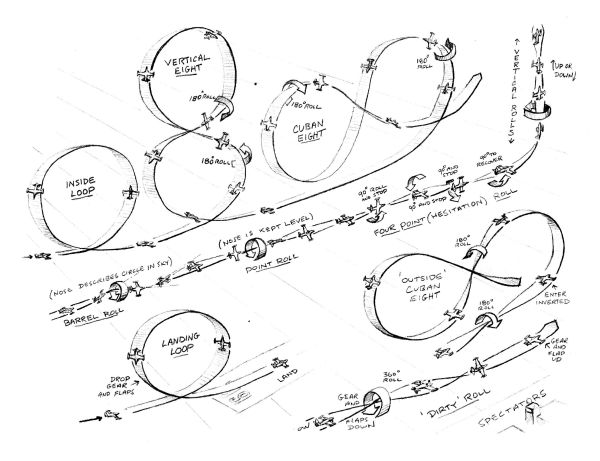 All RCAF pilots needed to master these manoeuvres, however, the Red Knight performed them at much lower levels. (Credit: Don Connolly)

Cuban-eight: A figure eight lying on its side. Pull the nose straight up and over the top. After pulling through the horizon on the top, inverted, perform a slow half roll to upright to arrive back at the starting point, speed and altitude. Continue on into the second half to finish where you started.
Landing loop: Positioning the start of the loop so that you will be at the runway button at the end of the loop, dropping gear and flaps once you get past the vertical. Careful! 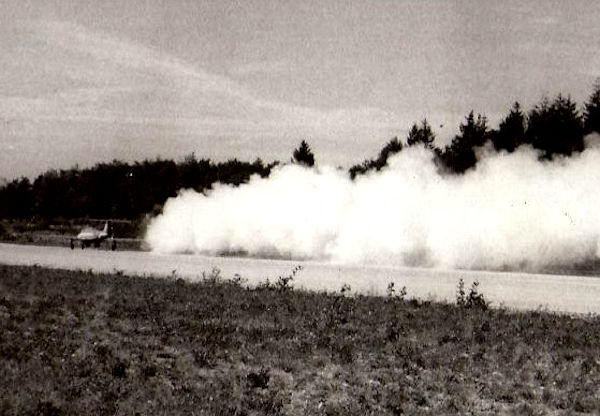 Loop: A basic manoeuvre, which forms the basis for many sequences. The idea is to pull the nose straight up and over the top without losing you’re heading and recovering at the starting altitude and speed. If you use too much speed and G you will bite into high-speed stalls, which throw you off heading and make for a jerky sequence.

Roll: A 360-degree revolution around the horizontal axis of the aircraft, in any plane, i.e. vertical, climbing or straight and level.
Vertical Eight: Starts as a roll-off-the-top, continues on into a second loop back to the roll-off point, then a half roll inverted to complete the bottom loop. Almost impossible in the T-bird unless you load on all the speed available – not good for close in shows. 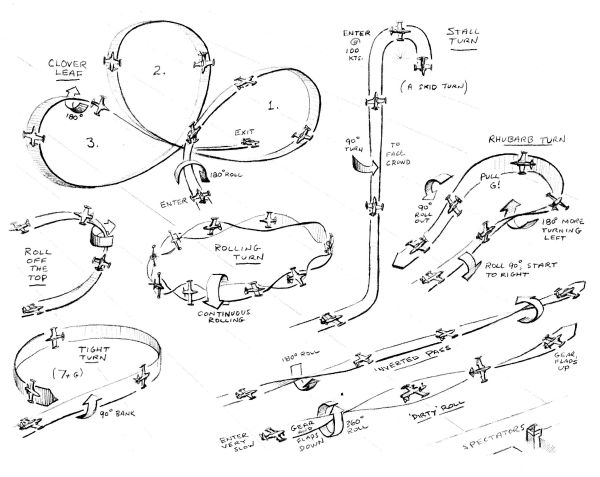 The number and type of manoeuvres differed with the weather conditions and the location of the show. (Credit: Don Connolly)

Low Pitch: A fighter or battle pitch from low altitude over the button to altitude necessary to achieve a landing. Started in World War II to keep speed up and vulnerability low until committed to the landing. Throw in a roll or rhubarb if you wish.

Rolling Pitch: A series of rolls as you break into the pitch. 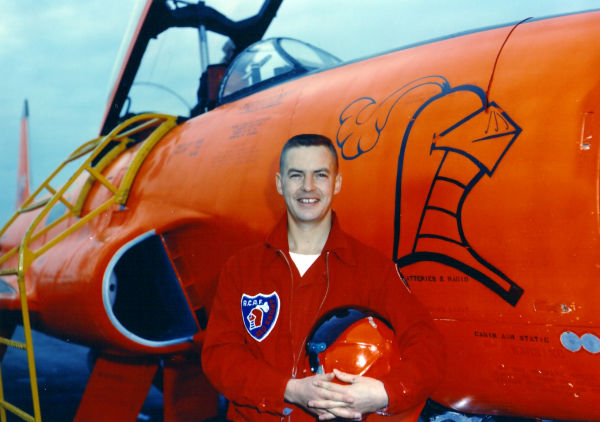