It was a warm, slightly muggy summer afternoon – just a few short years ago. The sun was beaming down through a hazy eastern Ontario sky. At the National Air Force Museum of Canada in Trenton, Ont, a young air cadet was leading a group of visitors on a guided tour of the RCAF Memorial Air Park. The air park is a 16 acre parcel of land adjacent to the museum. Military aircraft that have been “struck off strength” by the Canadian Forces are on static display there in a garden-like setting. Not far from the museum building, in the northeast section of the air park, the group approached a rather unique looking aircraft. It was a relatively small jet with a large tank at the tip of each wing. Although it was about the size of a fighter aircraft, there were two ejection seats visible through its long narrow canopy. Perhaps the most unusual thing about the aircraft was its bright red paint scheme, albeit somewhat faded from constant exposure to the sun.

Canadair CT-133 Silver Star No. T-33 21435, painted in the colours of the Red Knight, on static display at the National Air Force Museum of Canada. Note: This aircraft was not one of the four T-33s actually used during displays by the Red Knight pilots. (Photo credit: John Corrigan)

As the group came to a stop in front of the aircraft, the cadet informed them that this was a Canadair CT-133 Silver Star, more commonly known as the T-33 or “T-Bird.” He noted that the aircraft was used for pilot training and that the museum’s aircraft was painted in the colours of the Red Knight. “The Red Knight,” the cadet went on to explain, “was an air display team before the Snowbirds.” As if to emphasize the passage of time, the cadet added, “Away before!” Afterwards, he paused for a few seconds, to see if there were any questions. The group was silent, so the cadet assumed it was safe to continue and lead his charges to the next aircraft. A couple of people hung back for a minute or two to read the information on the plaque located along the pathway, in front of the aircraft. The plaque listed some details about the aircraft, its specifications and performance capabilities. This information appeared to be enough to satisfy the curiosity of the visitors that day. 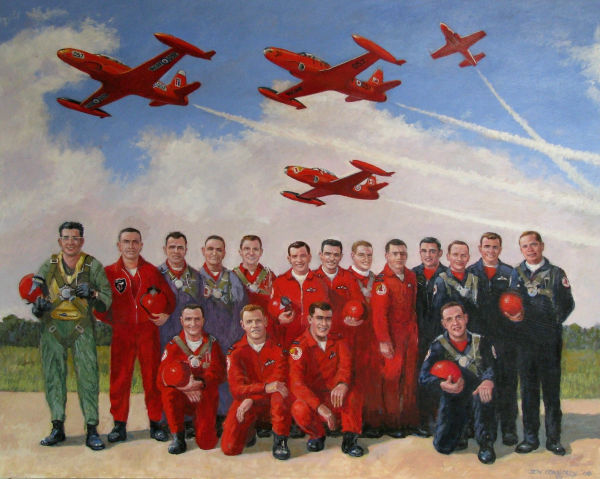 This painting, titled 'Red Knight Reunion' By Don Connolly, is a fictional representation of a gathering of all 17 Red Knight pilots.

The Red Knight was commonly sent to venues considered too small for the established aerobatics teams of the day. The Red Knight pilots brought an extremely impressive and professional aerobatics show to communities that might not otherwise get the chance to see such an event. As stated by former Snowbird team leader Dan Dempsey in his book, A Tradition of Excellence: “Each was a fine pilot who was selected for his ability to take an aircraft and fly it safely to the edge of the flight envelope. In comparison to an aerobatic team, which can shape its performance to take advantage of multiple aircraft, the solo performer is on his own. From the time he starts his show until he taxis back in front of the crowd, all eyes are on him. Only a gifted commentator can help fill the gaps that are inevitable as the performer repositions for his next manoeuvre. Thus, the onus is on the demonstration pilot to keep his show as tight as possible without exceeding either his own limitations or that of his aircraft. It is a tall order which takes a special breed of pilot and extraordinary discipline.”[1]

The trademark of the Red Knight was his brilliant red aircraft, first the T-33, and then, for the last two seasons, the CT-114 Tutor. The unique feature of the Red Knight displays was that all the manoeuvres were performed within the boundaries of the airfield – keeping the action in view of the spectators throughout the entire show.

In 1957, Roy Windover, a flight instructor at the RCAF Central Flying School (CFS) in Trenton, attended the CIAS and was disappointed to see an American exchange pilot flying an RCAF jet in a solo aerobatics display at Canada’s premiere air show. Windover vowed to himself that he would be the pilot flying the display in 1958. He lobbied the case to his superiors and was granted permission to begin practising a solo aerobatics routine.

To make Windover’s T-33 more visible to the audiences, it was painted a brilliant Day-Glo red. A photographer commented that the brilliant red aircraft reminded him of Baron Manfred von Richthofen, the “Red Knight” of Germany, and so the act was unofficially dubbed the “Red Knight.” Windover performed two shows at the 1958 CIAS and received critical acclaim from the media. Afterwards, the T-33 was stripped of its red paint and resumed regular training duties. Originally, there were no plans to continue the routine. 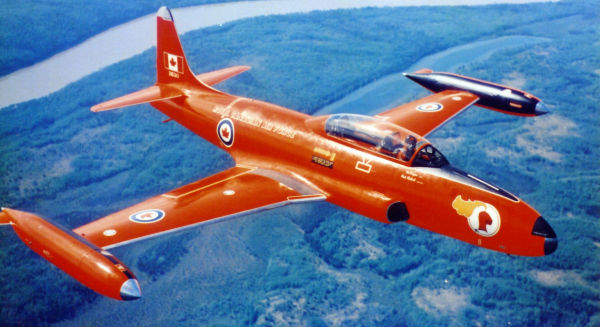 However, 1959 was the 35th anniversary of the RCAF and the 50th anniversary of powered flight in Canada. A number of special events were planned to celebrate these milestones. The chief of the air staff, Air Marshal Hugh Campbell, had seen the Red Knight perform at the CIAS, so when the events were being organized he requested the “red jet.” Once again the aircraft was painted an all-over Day-Glo red. In July, the program moved to Saskatoon, Sask. Soon afterwards, a black silhouette of a knight’s helmet was added to the nose of the aircraft.

The Red Knight made a total of 10 appearances in 1959. That fall, the aircraft was to be stripped of the red paint and returned to regular flying duties but the act had received much praise and requests for appearances were coming in for the next season, so the Red Knight program was extended into the new decade.

During 1960, the Red Knight completed a North American show schedule of 45 performances. For the first time, a full-time crew chief was assigned. This maintenance technician travelled with the Red Knight and looked after the aircraft on the road. Unfortunately, there was not much additional support provided by the air force. The two men were on their own – looking after meals, accommodations, ground transportation, air show details and maintenance problems.

In 1961 the act moved to RCAF Stn Portage la Prairie, Man – considered by many to be the home of the Red Knight. A second aircraft was acquired to serve as a spare, in case of mechanical problems. Both aircraft were painted in a striking scheme that featured a distinctive new emblem displayed prominently on the nose of the aircraft. The red knight’s helmet with the flowing yellow plume on a white, circular background was to become the official emblem of the Red Knight for the remainder of the program.

Now, with two aircraft, an alternate pilot was added to the team. This pilot would fly the spare aircraft to the major shows as a stand-in for the Red Knight in times of illness, or when scheduling conflicts required the Red Knight to be in two places at once. The alternate Red Knight would sometimes act as commentator and could provide a critical eye for possible improvements to the performance. It was intended that the alternate would become the Red Knight in the following season, giving the pilot a year to learn the routine. The structure of the team had now evolved into the basic format that would remain throughout the rest of the program.

After a fatal accident on Aug 21st 1963, there was some discussion about cancelling the program. In the end, it was decided that the Red Knight needed additional support while on the road. A new position, Red Knight Officer Commanding (OC) was created. The OC was to travel with the team, and looked after all the organizational details, allowing the pilots to concentrate on their shows.

The Canadian government made significant cuts to the defence budget in 1964. This forced the RCAF to reduce spending. The most notable actions taken were to disband the RCAF Golden Hawks aerobatic team and lay-off hundreds of pilots. With the budget cuts, the Red Knight’s schedule of performances was dramatically reduced, but the program was allowed to continue (in fact, the Red Knight would be the only national military aerobatics display in Canada for the next three seasons). In September of 1964, the Red Knight program moved again, this time to Moose Jaw, Sask.

The newly-integrated Canadian Forces approved the creation of an air demonstration team to celebrate Canada’s Centennial Year in 1967. The Golden Centennaires, as they were known, included nine Tutor aircraft, one CF-104 Starfighter, one CF-101 Voodoo, and two Avro 504K First World War vintage biplanes. The team schedule was to cover approximately 100 locations. Initially, there was no plan to continue the Red Knight operations into 1967 and beyond, but as air show requests came in, it became clear that the Centennaires alone could not meet all the air show commitments. The decision was made to resurrect the Red Knight program and the red T-Birds returned to Portage to join the team.

The Golden Centennaires were disbanded at the end of the 1967 season. Once again the Red Knight was Canada’s only national military aerobatics display. A second fatal accident occurred during a photo session on May 21st 1968. This left the program without an alternate pilot or a spare aircraft. Unfortunately, there were no suitable T-33 aircraft available. There were, however, a number of ex-Golden Centennaires Tutor aircraft in storage. These aircraft were already modified for aerobatics display, and two were dispatched to become the new mounts of the Red Knight.

The 1969 Red Knight was killed while attempting to make a forced landing during a display on July 13th, of that year. The second fatal accident in less than 14 months and the third in Red Knight history, effectively ended the program. When the Red Knight program was officially cancelled, in early 1970, it was the longest-running military aerobatics display in Canadian history. The exact number of performances has not been determined, however, it is known that the total exceeds 600 appearances. This ranks the Red Knight second only to the Snowbirds in total number of performances by a Canadian military aerobatics display.

Undoubtedly, many of today’s pilots were inspired to pursue careers in aviation after seeing a performance of the Red Knight. This, of course, is only the'“Reader’s Digest' version of the Red Knight story. There is so much more to this tale, as you will learn as you read through the chapters of 'The Red Knight' by John Charles Corrigan…
THE RED KNIGHT
Canada's Legendary Solo Jet-Aerobatics Performer
By Canadian Author John Corrigan ©
CONTACT JOHN