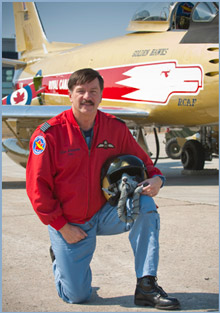 You only had to see him once – and you never forgot him. For twelve consecutive years commencing in 1958, the RCAF Red Knight thrilled millions of Canadians from coast to coast with his exciting repertoire of solo aerobatics. The flashy Day-Glo red paint scheme on the aircraft, later adorned with a knight’s helmet and yellow plume, was a beacon to young and old alike as it crisscrossed Canada each year performing at communities large and small. Whether silhouetted against an endless blue sky, the billowy white clouds of summer or the darkest thunderstorms, the Red Knight was impossible to miss. Even the name was magical … and the pilots who flew her helped inspire untold thousands of wide-eyed youngsters like me to pursue their dreams of an aviation career.

The story of the Red Knight is a tale of the human spirit and passion for flight – of vision, perseverance, triumph and tragedy. Author John Corrigan spent 25 years uncovering the underlying history of one of the RCAF’s most enduring icons, all reported herein in great detail. In 1959, the Red Knight was Training Command’s contribution to the fiftieth anniversary of powered flight in Canada, joining the legendary Golden Hawks in what was a glorious celebration of our aviation heritage. Eight years later, during Canada’s Centennial Year in 1967, the Red Knight team flew over one hundred shows in what was an epic season for the team.

There is an old saying that legends never die, and thanks to dedicated researchers like John Corrigan, the legend of Canada’s Red Knight will live on in perpetuity. This book, richly adorned by the artwork of Don Connolly and many photographs, will forever constitute a fitting tribute to not only the pilots who flew the Red Knight, but also to the technicians who maintained her and the scores of RCAF and Canadian Forces personnel who worked behind the scenes to support the program. This is their story – and their legacy.